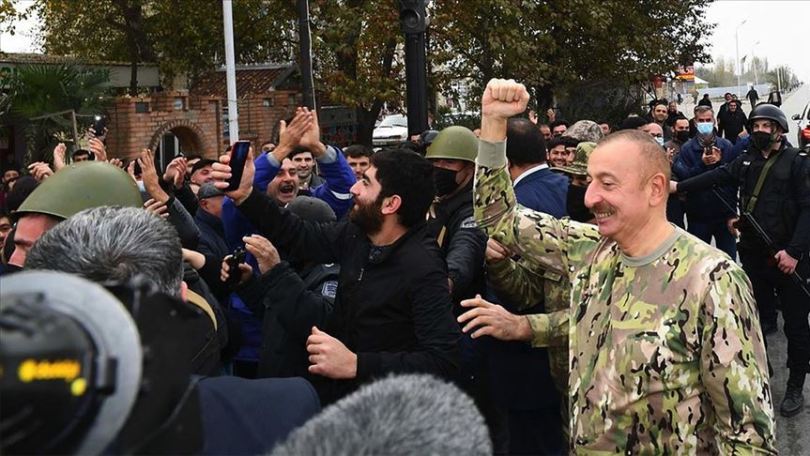 Azerbaijani President Aliyev said that he will be held accountable to international courts for the 30-year destruction of the Azerbaijani territories occupied by Armenia.

Aliyev first attended the groundbreaking ceremony of the new road to be built between Fuzuli and Shusha. Speaking here, Aliyev emphasized that the new road is of great importance.

Stating that this project was the first project to be implemented in the lands liberated from the occupation, Aliyev stated that he understood that Armenia’s resistance against Azerbaijan with the liberation of Shusha was meaningless. “Now we are in the political solution phase of the problem”

Aliyev said, “The enemy had to sign capitulation on November 10. The rescue of Shusha from the invasion showed our strength, the professionalism of our army, the courage and heroism of our soldiers. Operation Shusha will take a special place in world war history. This operation is our hero soldiers from mountains, hills, paths The rescue of Shusha is our glorious victory. ” said.

Stating that the damage caused by the Armenians to the region over the years will be calculated and the rights of the victims will be compensated by the state, Aliyev said that people will return to their homeland.

Aliyev said, “Now we have moved to the political solution stage of the problem. At this stage, Azerbaijan will and will get what it wants. The conflict phase of the problem is over. We have forced the enemy to sign capitulation. The provinces of Lachin, Aghdam and Kelbajar, which have been occupied so far, are also returned. Look how they are. They are doing savagery. They burn houses, buildings, schools, they cut down trees. They break the electricity lines. The whole world sees this. They have neither conscience nor morality. For these reasons, the victory in the 2nd Karabakh War is of great historical importance. “It is not a matter of liberating its own land from the invaders. It also shows the world how the invaders will end.” used the expressions.

Aliyev then came to Fuzuli city center with the armored vehicle he used. Aliyev, kissing the Azerbaijani flag in front of one of the buildings here, raised the flag.

Aliyev said that the ruins of Fuzuli’s villages and the city center made people feel a pain, “The whole world should know what Armenian brutality means. We will show this to the whole world. Other cities are in the same situation. It is as if a wild tribe has passed from here. And they wanted to erase our religious heritage and failed. Because we returned. From now on we will live here as we have lived for centuries. The destroyed city of Fuzuli is a living witness of Armenian fascism. was reinforcing. ” he spoke.

“I said nobody can block us”

Aliyev, stating that they received many messages of pressure and threat from different countries during the 44-day war, “I said that nobody can block us. We will go to the end. The enemy should accept our conditions. It was so.” said.

Saying that they expelled the invaders from their lands, Aliyev said, “We have ensured our territorial integrity. We did not allow the creation of a second Armenian state in the historical Azerbaijani territory. No status issue is at stake. There is only one Azerbaijan state consisting of many different ethnic groups. Individuals of all peoples and religions live in peace. The Armenian people.” he will live like that. ” used the expressions.