Qassem Soleimani, head of Iran’s elite Quds Force, killed in Baghdad as tensions between US and Iran escalate.

Tensions between the United States and Iran escalated on Friday after a US air raid killed Qassem Soleimani, the head of Iran’s elite Quds Force, and Abu Mahdi al-Muhandis, the deputy commander of Iran-backed militias known as the Popular Mobilisation Forces, or PMF.

The Pentagon confirmed the attack at Baghdad’s international airport, saying it came “at the direction of the president”.

Soleimani and al-Muhandis’s deaths are a potential turning point in the Middle East and are expected to draw severe retaliation from Iran and the forces it backs in the region against Israel and US interests.

Here are all the latest updates amid the heightened tensions as of Friday, January 3:

Trump: Ordered killing of Iranian general to prevent war, not start one

US President Donald Trump said he ordered the killing of Qassem Soleimani to stop a war, not start one, saying the Iranian military commander was planning imminent attacks on Americans.

“Soleimani was plotting imminent and sinister attacks on American diplomats and military personnel but we caught him in the act and terminated him,” Trump told reporters at his Mar-a-Lago resort.

“We took action last night to stop a war. We did not take action to start a war,” Trump said, adding that the US does not seek government change in Iran.

The US said it is sending nearly 3,000 more troops to the Middle East with defence officials saying the soldiers are from the 82nd Airborne Division at Fort Bragg, North Carolina.

Speaking on condition of anonymity, the officials said the troops are in addition to about 700 soldiers from the 82nd Airborne deployed to Kuwait earlier this week after the storming of the US embassy compound in Baghdad by Iran-backed militiamen and their supporters.

“The secretary-general has consistently advocated for de-escalation in the Gulf,” a spokesman for Guterres said in a statement.

“This is a moment in which leaders must exercise maximum restraint. The world cannot afford another war in the Gulf.”

Trump: Soleimani behind ‘thousands’ of US deaths, ‘hated’ by Iranians

President Trump took to Twitter to defend his decision to kill Soleimani, claiming that the Quds Force commander was behind the deaths of “millions of people”, including US citizens and his own Iranian compatriots.

Soleimani “killed or badly wounded thousands of Americans over an extended period of time, and was plotting to kill many more”, Trump said.

“He was directly and indirectly responsible for the death of millions of people, including the recent large number of PROTESTERS killed in Iran itself,” he added.

….of PROTESTERS killed in Iran itself. While Iran will never be able to properly admit it, Soleimani was both hated and feared within the country. They are not nearly as saddened as the leaders will let the outside world believe. He should have been taken out many years ago!

The speaker of the Iraqi parliament, Mohammed al-Halbousi, said in a statement: “Yesterday’s targeting of a military commander in Iraq’s armed forces near Baghdad International Airport is a flagrant breach of sovereignty and violation of international agreements.”

“Iraq must avoid becoming a battlefield or a side in any regional or international conflict,” he said.

Al-Halbousi, who as speaker is Iraq’s top Sunni Arab politician, called on the government to take all steps needed to stop such attacks.

Dozens of US citizens working for foreign oil companies in the southern Iraqi oil city of Basra were leaving the country on Friday, the oil ministry said.

The US embassy in Baghdad urged all its citizens to leave Iraq immediately.

Iraqi officials said the evacuation would not affect operations, production or exports.

‘US remains committed to de-escalation’: Pompeo

Washington is committed to “de-escalation” after a US air raid in Baghdad killed Soleimani, Secretary of State Mike Pompeo said.

Pompeo said on Twitter that he spoke to British Foreign Minister Dominic Raab and China’s top diplomat Yang Jiechi about the US decision to eliminate Soleimani.

Soleimani’s body to be sent to Iran

Flags at Iranian embassies abroad were ordered to fly at half-mast and preparations were being made for Soleimani’s body to be transferred to Iran. The date for the funeral has yet to be announced.

Responding to the US’s killing of Soleimani, Iran’s National Security Council spokesman Keyvan Khosravi said: “The legal, political, security, and military consequences of this crime is on the US government.”

“The costs that Washington has to pay will be much more severe than the mirage-like achievements of this sort of blind moves,” he added.

Tens of thousands rally against ‘US crimes’

Tens of thousands of people took to the streets in Iran to protest against US “crimes”, after US raids killed Soleimani.

Chanting “Death to America” and holding up posters of the slain commander, the demonstrators filled streets for several blocks in central Tehran after Friday prayers. 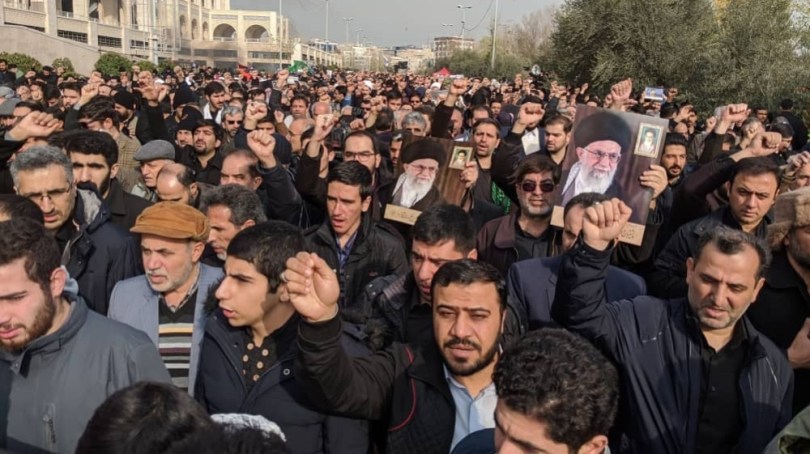 “Following the martyrdom of the glorious general haj Qassem Soleimani, I name Brigadier General Esmail Qaani as the commander of the Quds Force of the Islamic Revolutionary Guard Corps,” Ayatollah Ali Khamenei said in a statement posted on his official website.

In Pictures: Iran’s Qassem Soleimani killed in US air raid 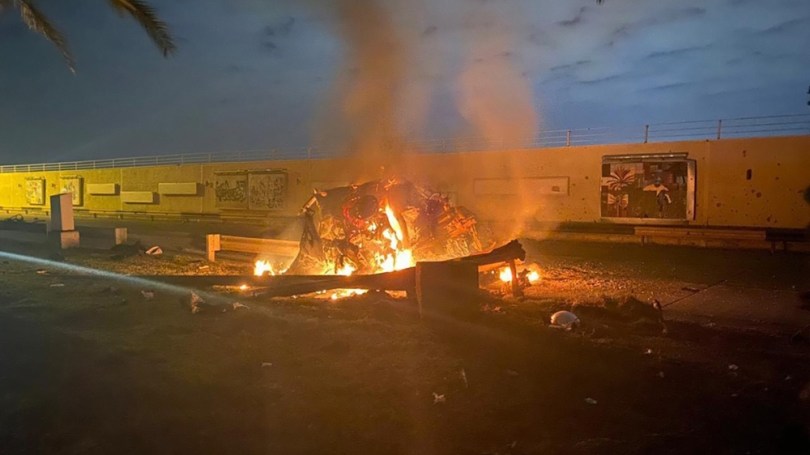 Click here for further images related to the Soleimani killing.

The US is urging all its citizens to leave Iraq “immediately”, citing “heightened tensions in Iraq and the region”.

A State Department statement added that: “Due to Iranian-backed militia attacks at the US Embassy compound, all consular operations are suspended. US citizens should not approach the Embassy.”

That comes after a crowd attempted to storm the embassy in Baghdad earlier this week to protest against US air raids aimed at a militia supported by Iran.

Hezbollah to continue path of Soleimani after US attack: Report

Nasrallah said the US would not be able to achieve its goals with this “big crime” and just punishment was the responsibility of all fighters, Al Manar reported.

Israel’s military had gone on heightened alert amid fears that Iran could strike through its regional allies such as Hezbollah to the north, or through Palestinian group Hamas and Islamic Jihad in Gaza.

Israel’s defence minister summoned the country’s military and security chiefs to Tel Aviv in the wake of the killing. Meanwhile, Prime Minister Benjamin Netanyahu has reportedly cut short his trip to Greece.

The source said the attack constituted a “serious escalation” and reaffirmed US responsibility for instability in Iraq, according to SANA.

Iraq’s prominent Shia leader Muqtada al-Sadr said the killing of Soleimani was targeting Iraq’s opposition and Jihad, adding that it will not weaken its resolve.

In a statement, al-Sadr called on his militias (Army of Imam Mahdi) and “other national and disciplined” armed groups to be prepared to protect Iraq. He also sent his condolences to Iran.

Qais al-Khazali, the head of the Asaib Ahl al-Haq armed faction, said: “All fighters should be on high alert for upcoming battle and great victory.”

“The end of Israel and removal of the US from the region will be the result of the assassination of Soleimani and Muhandis,” he said in a statement published by Iraqi media.

Lebanese pro-Hezbollah newspaper Al Akhbar is leading with a comment by its contributor Hassan Alaiq on the killing of Soleimani.

The Arabic article has a simple headline: The martyrdom of Soleimani: It is war

Who was Soleimani, Iran’s IRGC leader?

Soleimani acquired celebrity status at home and abroad as the leader of the foreign arm of Iran’s elite forces Islamic Revolutionary Guard Corps (IRGC) and for his key role in fighting in Syria and Iraq.

He survived several assassination attempts against him by Western, Israeli and Arab agencies over the past 20 years. Read more here.

Al Jazeera’s Charlotte Bellis reports on the life of Iran’s most important general.

“He joined his martyred brothers, but we will take vigorous revenge on America,” Mohsen Rezaei, a former commander of the IRGC who is now the secretary of a powerful state body, said in a post on Twitter.

Iran’s Supreme Leader Ayatollah Khamenei called for three days of mourning, saying Major General Soleimani’s killing will double the motivation of the resistance against the US and Israel.

“American leaders’ highest priority is to protect American lives and interests. But we cannot put the lives of American servicemembers, diplomats and others further at risk by engaging in provocative and disproportionate actions,” said House Speaker Nancy Pelosi.

“Tonight’s air strike risks provoking further dangerous escalation of violence. America – and the world – cannot afford to have tensions escalate to the point of no return,” she added. “The Administration has conducted tonight’s strikes in Iraq targeting high-level Iranian military officials and killing Iranian Quds Force Commander Qasem Soleimani without an Authorization for Use of Military Force (AUMF) against Iran. Further, this action was taken without the consultation of the Congress.”

She called for a briefing on the situation.